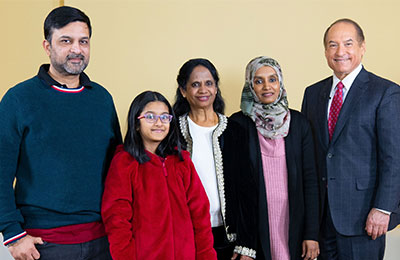 Case revived after NVC terminates it for failure to apply for visa within one year. Full story on CITIZEN PINOY.

Khalidha (second from right) was petitioned by her mother Shami (center) in 2004.

In 2011, the National Visa Center (NVC) sent a notice that Khalidha’s visa was available and gave her one year to reply. However, Khalida never received any notice, until she finally received one advising that her visa petition had been terminated, for failure to respond to the NVC within one year..

The family went to two lawyers, to a U.S. senator, and to a congressman, but none were successful in reviving the case.

Finally, a Filipino co-worker (and fan of Citizen Pinoy) suggested they consult with leading U.S. immigration attorney Michael J. Gurfinkel. After going through hundreds of pages of documents, and diligently reviewing the case history, Attorney Gurfinkel was able to convince the NVC to reopen the case and issued visas for the entire family.